Lightning and subvisible discharges produce molecules that clean the atmosphere 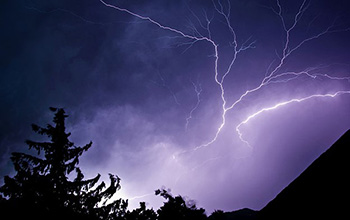 Lightning bolts break apart nitrogen and oxygen molecules in the atmosphere and create reactive chemicals that affect greenhouse gases. Now, atmospheric chemists have found that lightning, and, surprisingly, subvisible thunderstorm discharges (which cannot be seen by cameras or the naked eye) produce extreme amounts of the hydroxyl (OH) and hydroperoxyl radicals (HO2).

The researchers report the results of their U.S. National Science Foundation-funded research in Science and the Journal of Geophysical Research -- Atmospheres.

The hydroxyl radical is important in the atmosphere because it initiates chemical reactions and breaks down molecules such as the greenhouse gas methane. OH is the main driver of many changes in the atmosphere.

"Initially, we looked at these huge OH and HO2 signals found in the clouds and asked, 'What is wrong with our instrument?,'" said William Brune, a meteorologist at Penn State. "We assumed there was noise in the instrument, so we removed the huge signals from the dataset and shelved them for later study."

The data were collected from an instrument on a plane flown above Colorado and Oklahoma; the instrument analyzed chemical changes thunderstorms and lightning make in the atmosphere.

The researchers determined the signals were really hydroxyl and hydroperoxyl and worked with colleagues to see if these signals could be reproduced by sparks and subvisible discharges in the laboratory. The team then performed a re-analysis of the thunderstorm and lightning dataset.

"We were able to link the huge signals seen by our instrument flying through the thunderstorm clouds, to lightning measurements made from the ground," Brune said.

"These results are uncertain, however, partly because we do not know how these measurements apply to the rest of the globe," he said. "We only flew over Colorado and Oklahoma -- most thunderstorms are in the tropics. The whole structure of High Plains storms is different than those in the tropics. Clearly we need more aircraft measurements to reduce this uncertainty."

Sylvia Edgerton, a program director in NSF's Division of Atmospheric and Geospace Sciences added that "although the hydroxyl radical OH can help remove some air pollutants, such as carbon monoxide, it can react with other compounds, such as volatile organic compounds, to form secondary gases and aerosols, some of which are also air pollutants."

If subvisible lightning occurs routinely, the scientists said, then the hydroxyl and hydroperoxyl radicals these electrical events create need to be included in atmospheric models. Currently, they are not.