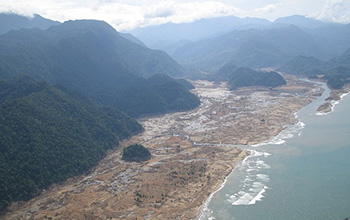 The aftermath of the 2004 tsunami that struck Aceh, Indonesia.

A new study found overlooked tsunami hazards related to undersea, near-shore strike-slip faults, especially for coastal cities adjacent to faults that traverse inland bays. Several areas around the world may fall into this category, including the San Francisco Bay Area, Izmit Bay in Turkey and the Gulf of Aqaba in Egypt.

The U.S. National Science Foundation-funded study, led by Ahmed Elbanna, a civil and environmental engineer at the University of Illinois Urbana-Champaign, and Ares Rosakis, an aeronautics and mechanical engineer at Caltech, used the Blue Waters supercomputer at the National Center for Supercomputing Applications to model tsunami hazards related to strike-slip faults around the globe. The results are published in Proceedings of the National Academy of Sciences.

"Whenever we saw large tsunamis triggered by earthquakes along strike-slip faults, people assumed that perhaps the earthquake had caused an undersea landslide, displacing water that way," Rosakis said.

The new finding shows that is not always the case. A strike-slip fault exists when two blocks of rock on the fault line slide horizontally past one another. The San Andreas Fault is an example of a strike-slip fault. The researchers explain that ground motions due to strike-slip earthquakes alone -- notably when supershear, the seismic equivalent of a sonic boom -- can trigger large tsunamis.

In September 2018, a moderate 7.5 magnitude earthquake and an unexpectedly powerful tsunami swept through Palu, a city situated on the inland side of Palu Bay on the Indonesian island of Sulawesi. The quake occurred along a northwest-southeast-trending strike-slip fault that runs through the city and plunges below the bay along Palu′s northwest shore.

"It looked like a bulldozer had come in and leveled the town," said co-author Costas Synolakis, a civil engineer at the University of Southern California who surveyed the area following the devastating event. "This is why it is so important that we try to understand what really happened."

Studies exploring connections between strike-slip faulting and tsunamis exist. However, the the focus is on specific fault systems or geographic locations, obscuring the complex details of the fault geometry and bathymetry.

"What is unique about our study is that instead of considering a location-specific event, we focused on the fundamentals of a strike-slip fault system interacting within the boundaries of a narrow bay," Elbanna said. "We opted to simulate a very basic planar fault passing through a very simplified smooth-bottomed bay, similar to a bathtub. Having this simplified baseline model allows us to generalize to anywhere on the planet that may be at risk."

Paul Raterron, a program director in NSF's Division of Earth Sciences, added, "This study shows that large tsunamis can be triggered by strike-slip earthquakes alone, without submarine landslides. Tsunami risks associated with strike-slip faulting may thus be higher than previously thought."