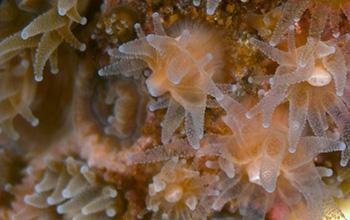 Close-up of a northern star coral colony taken from a microscope in the laboratory.

Researchers are finding that the northern star coral's recovery from a laboratory-induced stressor could help scientists better understand how to protect endangered tropical corals.

A U.S. National Science Foundation-funded study published in mSystems, a journal of the American Society for Microbiology, investigated antibiotic-induced disturbance of the northern star coral (Astrangia poculata). The results showed that antibiotic exposure significantly altered the composition of the coral's mucus bacterial microbiome, but that all antibiotic-treated corals recovered within two weeks in ambient seawater.

The stony northern star coral is found off the coast of Rhode Island and other New England states in brown colonies with high densities of symbiotic dinoflagellate algae, and in white colonies with low densities of symbiotic dinoflagellate algae. The study found that corals with algal symbionts -- organisms embedded in the coral's tissue -- recovered their mucus microbiomes quicker and more consistently than those without algal symbionts.

The study also identified six bacterial taxa that played a prominent role in returning the coral to its healthy microbiome.

"The work suggests that the coral may be able to recover its mucus microbiome following disturbance, identifies specific microbes that may be important, and demonstrates that algal symbionts may play a previously undocumented role in microbial recovery and resilience to environmental change," the paper states.

With thermal bleaching and disease posing major threats to tropical corals, this research, along with other work on tropical corals, is "a major step toward identifying the microbiome's roles in maintaining coral resilience," the paper notes.

"We think the algae are helping the coral select the microbes that live with them, and this suggestion of symbiont-microbe coordination following disturbance is a new concept for corals," said paper co-author Amy Apprill, a scientist at the Woods Hole Oceanographic Institution.

"Anytime we see corals recover it shows that they can combat a stressor and figure out how to become healthy again," said Apprill. "What we found here is translatable to tropical corals that are faced with stressors such as warming waters, disease and pollution. It suggests that symbiotic algae play a major role in providing consistency and resilience to the coral microbiome."