Developing a taste for carbs wasn't necessarily a bad thing 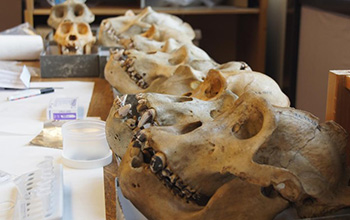 A new study looking at the evolutionary history of the human oral microbiome shows that Neanderthals and ancient humans adapted to eating starch-rich foods as far back as 100,000 years ago, much earlier than previously thought.

The research, funded in part by the U.S. National Science Foundation, suggests that such foods became important early in human evolution, well before the recognized shift in the human diet with the introduction of farming. While these early humans probably didn't realize it, the benefits of bringing starch-rich foods into their diet likely helped pave the way for the expansion of the human brain thanks to the glucose in starch, the brain's main fuel source.

"We think we're seeing evidence of a really ancient behavior that might have been part encephalization -- or the growth of the human brain," said Christina Warinner, an anthropologist at Harvard University. "It's evidence of a new food source that early humans were able to tap into in the form of roots, starchy vegetables and seeds."

The findings come from a study published in Proceedings of the National Academy of Sciences. Researchers analyzed the oral microbiomes of Neanderthals, modern humans and other nonhuman primates, including what's believed to be the oldest oral microbiome ever genetically sequenced –- that of a 100,000-year-old Neanderthal.

The goal was to better understand how the oral microbiome -- a community of microorganisms in the mouth that helps protect against disease and promotes health -- developed, since little is known about its evolutionary history.

John Yellen, a program director in NSF's Division of Behavioral and Cognitive Sciences, added, "Understanding the role food played in the evolutionary development of human uniqueness is complicated because many types of food, especially plants, are poorly preserved in the fossil record. This innovative study of ancient bacteria in fossil plaque provides a new and powerful way to understand the evolution of humans and our social and ecological history."