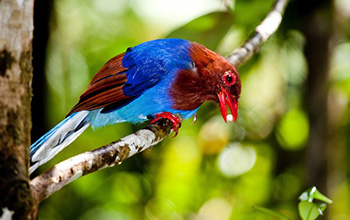 A blue magpie in Sri Lanka's Sinharaja Forest Reserve, a site that was part of the study.

As the health of ecosystems in regions around the globe declines due to a variety of rising threats, scientists continue to seek clues to help prevent future collapse.

A new analysis by scientists around the world, led by a researcher at the University of California, San Diego, is furthering science's understanding of species interactions and how diversity contributes to the preservation of ecosystem health.

A coalition of 49 researchers examined data describing tree species in forests located across a broad range of countries, ecosystems and latitudes. Information about the 16 forest diversity plots in Panama, China, Sri Lanka, Puerto Rico and other locations -- many in remote, inaccessible areas -- was collected by hundreds of scientists over decades.

Lead researcher Christopher Wills, an evolutionary biologist at UC San Diego, says the new study addresses large questions about these complex ecosystems -- made up of trees, animals, insects, bacteria and viruses -- and how such stunning diversity is maintained to support the health of the forest.

The U.S. National Science Foundation-funded analysis -- believed to be the most detailed study of such an enormous set of ecological data -- is published in PLOS Computational Biology. The research was conducted in part at NSF's Luquillo Long-Term Ecological Research site.

"Evidence shows that all ecosystems are characterized by strong interactions between and among their many species," said Wills. "These webs of interactions are important contributors to the preservation of ecosystem diversity."

The authors note, however, that many of these interactions -- including those involving microscopic pathogens and the chemical defenses mounted by their prey -- are not easy to identify and analyze in ecosystems with tens to hundreds of millions of inhabitants.

Francisco (Paco) Moore, a program director in NSF's Division of Environmental Biology said that "the study indicates that environmental patterns emerge in unique ways across time and space due to the scale-dependent interplay of ecology and evolution."