New findings on transmission of disease within and between animal species 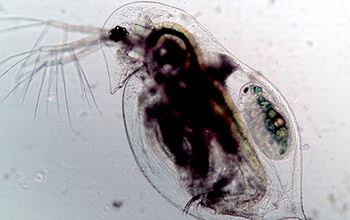 Whether it's plankton exposed to parasites or people exposed to pathogens, a host's initial immune response plays an integral role in determining whether infection occurs and to what degree it spreads in a population, new University of Colorado Boulder research suggests.

The U.S. National Science Foundation-funded findings, published in The American Naturalist, provide valuable insight for understanding and preventing the transmission of disease in and between animal species. From parasitic flatworms transmitted by snails to humans in developing nations, to zoonotic spillover events from mammals and insects to people --- which have caused global pandemics like COVID-19 and West Nile virus --- an infected creature's immune response is a vital variable in calculating what happens next.

"One of the biggest patterns we're seeing in disease ecology and epidemiology is the fact that not all hosts are equal," said Tara Stewart Merrill, lead author of the paper. "In infectious disease research, we want to build host immunity into our understanding of how disease spreads." Paper co-authors are Zoi Rapti and Carla Cáceres of the University of Illinois Urbana-Champaign.

"The research team used data collected from experiments to inform a mathematical model of infection which was evaluated using a multistage process," said Betsy von Holle, a program director in NSF's Division of Environmental Biology. "This model points to the stage when the host was most likely to resist an infection and allows researchers much greater insight into how disease moves through a population."

Invertebrates are common vectors for disease, which means they can transmit infectious pathogens between humans or from animals to humans. Vector-borne diseases, such as malaria, account for almost 20% of all infectious diseases worldwide and are responsible for more than 700,000 deaths each year.

Yet epidemiological studies have rarely considered invertebrate immunity and recovery in creatures that are vectors for human disease. They assume that once exposed to a pathogen the invertebrate host will become infected.

But what if it were possible for invertebrates to fight off diseases and break the link in the chain that passes them on to humans?

While observing a tiny species of zooplankton (Daphnia dentifera) throughout its lifecycle and exposure to a fungal parasite (Metschnikowia bicuspidata) the researchers saw this potential in action. Some of the plankton were good at stopping fungal spores from entering their bodies, and others cleared the infection in a limited time after ingesting the spores.

"Our results show that there are several defenses that invertebrates can use to reduce the likelihood of infection, and that we really need to understand those immune defenses to understand infection patterns," said Stewart Merrill.