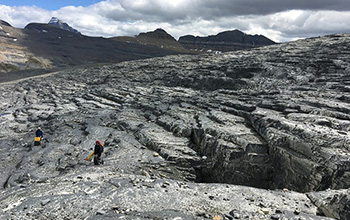 Photos show the hard, rough country some glaciers slide over: rocky domes and bumps in granite, rocky steps and depressions in limestone. The glaciers' beds often dwarf the researchers and their instruments.

During research in places exposed by retreating glaciers in the Swiss Alps (Rhone, Schwarzburg and Tsanfleuron glaciers) and the Canadian Rockies (Castleguard Glacier), four glaciologists used laser and drone technology to precisely measure the glaciers' rocky beds and record their contours.

The scientists then turned their measurements into high-resolution digital models of the glacier beds. They worked with subunits of the models to study how glaciers slide along bedrock bases.

"We studied the relationship between the forces at the base of the glacier and how fast the glacier moves," said Neal Iverson, a geologist at Iowa State University and the study leader.

The resulting new glacier "slip law" describes the "relationship between forces exerted by ice and water on the bed, and glacier speed," Iverson said. The slip law could be used by other researchers to better estimate how quickly ice sheets flow into oceans and raise sea levels.

In addition to Iverson, the study team included Christian Helanow and colleagues. A grant from the U.S. National Science Foundation supported the team's work.

Helanow is the first author of a paper published in Science Advances that describes the new slip law. The calculations –- based on a computer model of the physics of how ice slides over and separates locally from rough bedrock –- and the resulting slip law indicate that small changes in force at the glacier bed can lead to big changes in glacier speed.

Justin Lawrence, a program director in NSF's Division of Earth Sciences added, "This exciting advance in our understanding of glacial mechanics, particularly the basal sliding process, provides an important piece in the puzzle for reducing uncertainty in climate projections and impact assessments."