How to thermally cloak an object 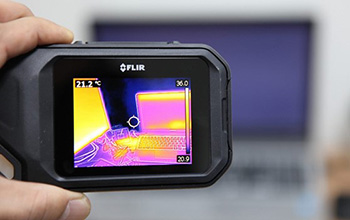 Can you feel the heat? To a thermal camera, which measures infrared radiation, the heat we feel is visible, like the heat of a traveler in an airport with a fever or the cold of a leaky window or door in the winter.

In a paper published in Proceedings of the Royal Society A: Mathematical, Physical and Engineering Sciences, an international group of applied mathematicians and physicists, including Fernando Guevara Vasquez and Trent DeGiovanni of the University of Utah, report a theoretical way of mimicking thermal objects or making objects invisible to thermal measurements. And it doesn't require a Romulan cloaking device or Harry Potter's invisibility cloak. The research is funded by the U.S. National Science Foundation.

The method allows for fine-tuning of heat transfer even in situations where the temperature changes in time, the researchers say. One application could be to isolate a part that generates heat in a circuit (say, a power supply) to keep it from interfering with heat-sensitive parts (such as a thermal camera). Another application could be in industrial processes that require accurate temperature control in both time and space, for example controlling the cooling of a material so that it crystallizes in a particular manner.

Watch a visualization of how the method cloaks a kite-shaped object, or watch how it works for a Homer Simpson-shaped object.

Cloaking or invisibility devices have long been elements of fictional stories, but in recent years scientists and engineers have explored how to bring science fiction into reality. One approach, using metamaterials, bends light in such a way as to render an object invisible.

Just as eyes see objects if they emit or reflect light, a thermal camera can see an object if it emits or reflects infrared radiation. In mathematical terms, an object could become invisible to a thermal camera if heat sources placed around it could mimic heat transfer as if the object were not there.

The team's novel approach uses heat pumps rather than specially crafted materials to hide the objects. A simple household example of a heat pump is a refrigerator; to cool food it pumps heat from the interior to the exterior. Using heat pumps is much more flexible than using carefully crafted materials, Guevara says. For example, the researchers can make one object or source appear as a completely different object or source. "At least from the perspective of thermal measurements," Guevara says, "they can make an apple appear as an orange."