Heat stress in U.S. may double by century's end 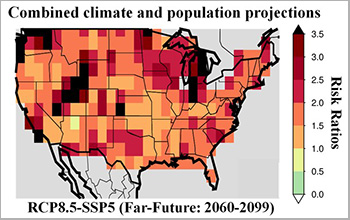 Periods of extremely high heat are projected to double across the lower 48 states by 2100 if the world continues to emit high levels of greenhouse gases, according to a new study in Earth's Future, an American Geophysical Union journal.

The heat stress will be felt most strongly in areas with growing populations. The Pacific Northwest, central California and the Great Lakes region could experience as much as a threefold increase compared to the past 40 years. Heat stress occurs when both the temperature and relative humidity get high enough that the human body can't rid itself of the excess heat, leading to strokes, heat cramps and other health problems.

"Without doing any mitigation strategies, the impact of heat stress is likely to increase," said Ashok Mishra, a civil engineer at Clemson University and an author of the U.S. National Science Foundation-funded study.

Human-driven climate change is leading to an average increase in temperatures across the world. However, people don't necessarily notice a slow, even warming as much as an extreme event.

Mishra and co-authors wanted to see how heat stress would increase at the same time as a general increase in temperature and relative humidity. They assumed that while humans may experience higher temperatures on average in many areas, people will acclimatize to the new normal, but extremely high heat index peaks, above even the yearly median values, will continue to have negative impacts on human health.

While previous research has usually examined how extreme heat events may increase in severity, frequency and duration, most studies have looked at one of these in isolation. Mishra and his colleagues calculated how all these might increase together in the future under a high emissions scenario.

Bruce Hamilton, a program director in NSF's Directorate for Engineering, added that "the research underscores how vitally important it is to implement effective mitigation measures."