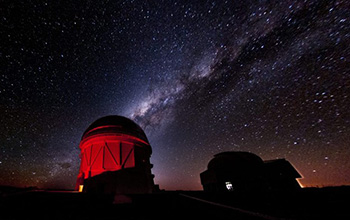 New results from the Dark Energy Survey, or DES, use the largest-ever sample of galaxies over an enormous piece of the sky to produce the most precise measurements of the universe's composition and growth to date. Scientists funded by the U.S. National Science Foundation found that the way matter is distributed throughout the universe is consistent with predictions in the standard cosmological model, the best current model of the universe.

Over the course of six years, DES surveyed 5,000 square degrees -- almost one-eighth of the entire sky -- in 758 nights of observation, cataloguing hundreds of millions of objects. The results draw on data from the first three years -- 226 million galaxies observed over 345 nights -- to create the largest and most precise maps yet of the distribution of galaxies in the universe at relatively recent epochs.

Since DES studied nearby galaxies as well as those billions of light years away, its maps provide both a snapshot of the current large-scale structure of the universe and a "movie" of how that structure has evolved over the course of the past 7 billion years.

Ordinary matter, or visible matter, makes up only about 5% of the universe. Dark energy accounts for about 70%; cosmologists hypothesize that dark energy drives the accelerating expansion of the universe by counteracting the force of gravity. The remaining 25% is dark matter, which binds galaxies together with its gravitational influence. Both dark matter and dark energy are invisible and remain a mystery, but DES seeks to illuminate their nature by studying how each competes and shapes the large-scale structure of the universe over cosmic time.

DES photographed the night sky using the 570-megapixel Dark Energy Camera on the Victor M. Blanco 4-meter telescope at the Cerro Tololo Inter-American Observatory in Chile, a program of NSF's NOIRLab. "DES shows that the era of big survey data has well and truly begun," said Chris Davis, a program director in NSF's Division of Astronomical Sciences. "DES on NSF's Blanco telescope has set the scene for the remarkable discoveries to come with Vera C. Rubin Observatory over the coming decade."

One of the most powerful digital cameras in the world, the Dark Energy Camera was designed specifically for DES and built and tested at Fermilab. The DES data were processed at the National Center for Supercomputing Applications at the University of Illinois Urbana-Champaign.

Nigel Sharp, a program director in NSF's Division of Astronomical Sciences added, "The strength of massive surveys like DES to analyze the evolution of the universe more precisely is enhanced by this innovative use of AI tools, which leads the way to exciting results from future even larger surveys."