Earth's vegetation is changing faster today than it has over the last 18,000 years 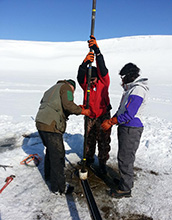 The researchers collect a core sample in St. Paul, Alaska.

A global survey of fossil pollen has shown that the planet's vegetation is changing at least as quickly today as it did when the last ice sheets retreated around 10,000 years ago. Approximately 3,000 to 4,000 years ago, Earth's plant communities began changing at an accelerated pace. Today, this pace rivals or exceeds the rapid turnover that took place as plants colonized formerly frozen landscapes and adapted to a global climate that warmed by about 10 degrees Fahrenheit.

The U.S. National Science Foundation-funded research, published in Science, suggests that human influence on ecosystems and landscapes visible today began in the earliest civilizations with the rise of agriculture, deforestation and other practices.

The work also suggests that ecosystem rates of change will continue to accelerate over the coming decades, as modern climate change is adding to this long history of flux. By showing that recent biodiversity trends are the start of a longer-term acceleration in ecosystem transformations, the new study provides context for other recent reports that global biodiversity changes have accelerated over the last century.

An international collaboration of scientists led the new analysis, which was powered by an innovative database for paleoecological data. The Neotoma Paleoecology Database is an open-access tool that gathers and curates data on past ecosystems. Neotoma is chaired by University of Wisconsin-Madison geographer Jack Williams, who co-led the research.

The study authors analyzed more than 1,100 fossil pollen records from Neotoma, spanning all continents except Antarctica, to understand how ecosystems have changed since the end of the last ice age about 18,000 years ago, and how quickly this change occurred.

"At the end of the ice age, we had complete, biome-scale ecosystem conversions," said Williams, who also curates Neotoma's North American pollen database. "And over the past few thousand years, we're at that scale again. It has changed that much. And these changes began earlier than we might have thought before."

Raleigh Martin, a program director in NSF’s Division of Earth Sciences added, "By providing a resource for scientists to contribute and curate data on past environmental change, the Neotoma Paleoecology Database enabled this unprecedented compilation of fossil pollen records. The results show a global acceleration in vegetation change over roughly the past 4,000 years. The findings will help inform future vegetation management in the context of climate change."