Researchers reveal the inner workings of a viral DNA-packaging motor 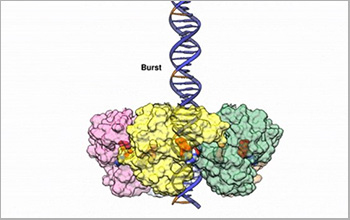 Researchers have discovered the inner workings of the molecular motor that packages genetic material into double-stranded DNA viruses. The advance provides insight into a critical step in the reproduction cycle of viruses such as pox, herpes and adenoviruses. It could also inspire researchers creating microscopic machines based on naturally occurring biomotors.

"There were several missing pieces of information that prevented us from understanding how these kinds of DNA packaging motors work, which hindered our ability to design therapeutics or evolve new technologies," said Gaurav Arya, a mechanical engineer, biomedical engineer and chemist at Duke and a co-author of the papers. "But with new insights and simulations, we were able to piece together a model of this fantastic mechanism, which is the most detailed ever created for this kind of system."

Viruses come in many varieties, but their classification generally depends upon whether they encode their genetic blueprints into RNA or single- or double-stranded DNA. The difference affects how the genetic material is packaged into new viruses. While some viruses build a protein container called a capsid around newly produced RNA or DNA, others create the capsid first and then fill it with the genetic material.

Most double-stranded DNA viruses take the latter route, which presents many challenges. DNA is negatively charged and does not want to be crammed together into a small space. It is also packaged into an extremely dense, nearly crystalline structure, which requires a lot of force.

"The benefit of this is that, when the virus is ready to infect a new cell, the pressure helps inject DNA into the cell once it's punctured," said Joshua Pajak at Duke. "It's been estimated that the pressure exceeds 800 psi, which is almost ten times the pressure in a corked bottle of champagne."

Forcing DNA into a tiny capsid at that pressure requires an extremely powerful motor. Until recently, researchers only had a vague sense of how the motor worked. "This work demonstrates how even simple viruses have evolved very complex machinery," said Wilson Francisco, a program director in NSF’s Division of Molecular and Cellular Biosciences.