Pharmaceutical industry could quickly identify the most promising drugs 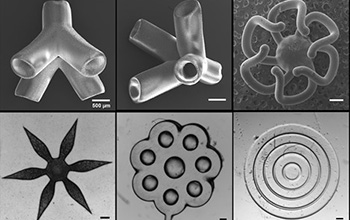 Examples of the geometries the high-throughput 3D bioprinter can rapidly produce.

The ability to rapidly produce such samples could accelerate high-throughput preclinical drug screening and disease modeling, the scientists said.

"This research has the potential to facilitate the improved investigation of diseases, eventually leading to novel therapies and successful treatments," said Nora Savage, a program director in NSF’s Directorate for Engineering.

The process for a pharmaceutical company to develop a new drug can take up to 15 years and cost up to $2.6 billion. It generally begins with screening tens of thousands of drug candidates in test tubes. Successful candidates then get tested in animals, and any that pass this stage move on to clinical trials. With luck, one of these candidates will make it into the market as an FDA-approved drug.

The high-throughput 3D bioprinting technology could accelerate the first steps of this process. It would enable drug developers to rapidly build up large quantities of human tissues on which they could test and weed out drug candidates much earlier.

"With human tissues, you can get better data -- real human data -- on how a drug will work," said Shaochen Chen, a nanoengineer at UC San Diego. "Our technology can create these tissues with high-throughput capability, high reproducibility and high precision. This could really help the pharmaceutical industry quickly identify and focus on the most promising drugs."

The work was published in the journal Biofabrication. The researchers note that while their technology might not eliminate animal testing, it could minimize failures encountered during that stage.