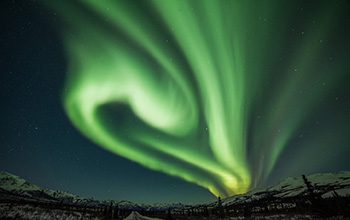 The spectacularly colorful aurora borealis -- or northern lights -- that fills the sky in high-latitude regions has fascinated people for thousands of years. Now, a team of scientists has solved one of the last mysteries surrounding its origin.

Researchers know that electrons and other energized particles, which emanate from the sun as part of the "solar wind," speed down Earth's magnetic field lines and reach the upper atmosphere. There they collide with oxygen and nitrogen molecules, kicking them into an excited state. These molecules then relax by emitting light, producing the beautiful green and other hues of the aurora.

What has not been well understood is precisely how groups of electrons accelerate through the magnetic field on the last leg of their journey, reaching speeds of up to 45 million mph. In a study published in Nature Communications the question is answered by physicists at the University of California, Los Angeles, Wheaton College, the University of Iowa and the Space Science Institute.

A popular theory has been that electrons hitch a ride on Alfvén waves -- electromagnetic waves that spacecraft have frequently identified traveling toward Earth along magnetic field lines above auroras. While space-based research has provided strong support for the theory, limitations inherent to spacecraft measurements have prevented a definitive test.

To overcome these limitations, physicists conducted laboratory experiments at UCLA's Basic Plasma Science Facility, supported by the U.S. National Science Foundation and the U.S. Department of Energy. The research is the first direct test showing that Alfvén waves can produce accelerated electrons that cause the aurora.

Vyacheslav (Slava) Lukin, a program director in NSF's Division of Physics, said that "this experimental confirmation of the physics behind the aurora is due to the ingenuity of research groups at the University of Iowa and UCLA. From student support via an NSF Graduate Research Fellowship, to the NSF CAREER program for early career faculty, to the 25-year partnership between NSF and the Department of Energy that has enabled the unique capabilities of the Basic Plasma Science Facility, this is a discovery made possible by consistent support of the university research community."