Don't like eating greens? Blame it on Brassica domestication 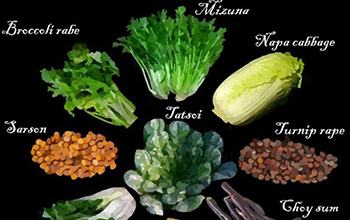 Delicious to some, but a bitter bane to others' taste buds, vegetables like broccoli rabe, bok choy and turnips are a dinner staple -- and picky eater conflict -- around the world.

It all likely started in the mountains near present-day Afghanistan, where humans first domesticated turnips 3,500 to 6,000 years ago, according to a new study published in the journal Molecular Biology and Evolution. University of Wisconsin-Madison botanist Eve Emshwiller and scientist Alex McAlvay at The New York Botanical Garden led the research.

To identify the genetic root of it all, the team reconstructed an evolutionary tree from a comparative DNA sequence analysis of more than 400 different varieties of the species Brassica rapa  from around the world.
Just as varieties of ancient corn look very different than the hybrid crops of today's farms, Brassica  revealed a similar past.

From this tree, the researchers discovered that Central Asian turnips were the most genetically diverse crops. That in turn suggested that humans in the region may have most valued the fatter, starch-rich taproots that became turnips several thousand years ago, as agriculture took root around the world.

The U.S. National Science Foundation-funded team identified the Hindu Kush mountains as the epicenter of domestication and weeds from the Caucasus region as among the most likely wild relatives of the species' vegetable crops. Turnips then spread west to Europe and east to East Asia, where farmers later selected for larger leaves. These leafy versions became bok choy, napa cabbage and broccoli rabe, among other vegetables found in today's grocery stores.

Ancient cultures also pointed to evidence that matched the genetic analysis. Literary references to turnips in the region, and the apparent existence of the word for "turnip" in the ancestor of languages from the region, also supported the turnip as the original domesticated form.

"Understanding how wild plants were domesticated can help us improve current crops and tell us how human civilizations emerged," says Sam Scheiner, a program director in NSF's Division of Environmental Biology. "This study adds an important, new chapter to that story."