Is Earth's core lopsided? Strange goings-on in our planet's interior 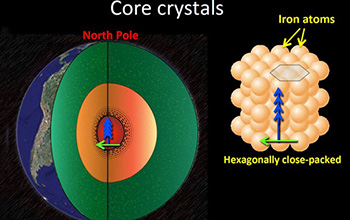 For unknown reasons, Earth's solid-iron inner core is growing faster on one side than the other. It's been doing so since it started to freeze out from molten iron more than half a billion years ago, according to seismologists at the University of California, Berkeley. The results of the study funded by the U.S. National Science Foundation are published in Nature Geoscience.

"The processes involved in the crystallization of the core strongly impact the generation of Earth's magnetic field, which shields the surface from solar radiation," said Paul Raterron, a program director in NSF's Division of Earth Sciences. "This study sheds new light on when Earth's inner core formed and how it grows."

The faster growth, under Indonesia's Banda Sea, has not left the core lopsided. Gravity evenly distributes the new growth -- iron crystals that form as the molten iron cools -- to maintain a spherical inner core that expands in radius by an average of one millimeter per year.

This has implications for Earth's magnetic field and its history. Convection in the outer core driven by release of heat from the inner core is what today drives the dynamo that generates the magnetic field that shields us from dangerous particles from the Sun.

"We provide rather loose bounds on the age of the inner core -- between half a billion and 1.5 billion years -- that can be of help in the debate about how the magnetic field was generated prior to the existence of the solid inner core," said Barbara Romanowicz, a UC Berkeley geoscientist. "We know that the magnetic field existed 3 billion years ago, so other processes must have driven convection in the liquid core at that time."

The relatively young age of the inner core may mean that early in Earth’s history core convection was driven by light elements chemically separating from the liquid iron, not from crystallization of iron, which we see today.

"Debate about the age of the inner core has been going on for a long time," added Daniel Frost, also a geoscientist at UC Berkeley. "The complication is if the inner core has been able to exist only for 1.5 billion years -- based on what we know about how it loses heat and how hot it is -- then where did the older magnetic field come from? That is where this idea of dissolved light elements that then freeze out came from."