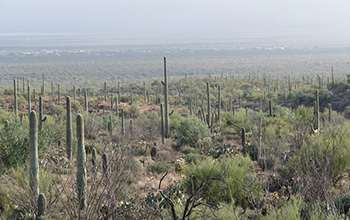 A first-of-its-kind large-scale study of vegetation growth in the Northern Hemisphere over the past 30 years has found that vegetation is becoming increasingly water-limited as global temperatures increase.

The results are significant since vegetation is one of the biggest factors when it comes to controlling water and carbon cycling across Earth, which influence global temperatures. The U.S. National Science Foundation-funded work by IUPUI and Indiana University Bloomington researchers Wenzhe Jiao, Lixin Wang and colleagues was published in Nature Communications.

"Without water, living things struggle to survive, including plants," said Wang, senior author of the study and an ecohydrologist. "Changes in vegetation response to water availability can result in significant shifts of climate-carbon interaction."

Global temperature and the concentration of atmospheric carbon dioxide have been increasing. These changes are expected to cause increased atmospheric water demand -- the amount of water transferred from soil and plants to the atmosphere -- and more frequent extreme hot days and droughts. All these factors indicate that vegetation growth may have suffered more water stress under a warming climate.

"However, quantifying the changes in vegetation constraints at large spatial and temporal scales is challenging," he said. To overcome this obstacle, the researchers used satellite remote sensing data and meteorology data covering large spatial scales from 1982 to 2015.
The scientists developed their own metrics to indicate water constraints and then tracked the changes in the metrics. They examined the relationship between vegetation growth and water deficit at each grid cell over the extratropical Northern Hemisphere -- 604,800 data points each year -- over more than 30 years.

"The results of this study suggest that as the frequency and severity of droughts increases with climate change, we will see increasing limits on water availability and declines in vegetation growth," said Laura Lautz, a program director in NSF's Division of Earth Sciences. "The research sheds light on the complex ways climate change can drive further changes in the water cycle and in ecosystem responses."