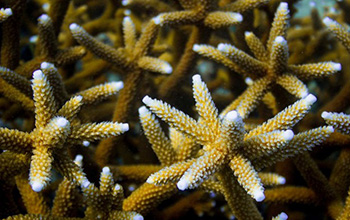 Warming seas are driving many species of marine life to shift their geographic ranges out of the tropics to higher latitudes where the water is cooler.

Florida's reefs will not be able to make that northward move, however, as they will be caught between intolerably warm tropical waters and increasingly frequent water-cooling cold snaps, according to the findings of the U.S. National Science Foundation-funded research by scientists at the Florida Institute of Technology and other institutions published in Nature Scientific Reports.

Populations of the main species of reef-building corals are already in dire condition. With nowhere to go, the corals will decline even more drastically.

Corals are colonies of animals related to sea anemones. They have single-celled algae living inside them that feed them with carbohydrates the algae make by photosynthesis. Coral colonies lay down limestone to make reefs that protect shorelines from storm waves and provide habitat for fish that feed half a billion people worldwide.

In Florida, spiny lobster, snapper and grouper find shelter, food and breeding sites in coral reefs, which generates $4.4 billion in local sales in the Sunshine State and more than 70,000 related jobs.

Now climate change is raising temperatures and disrupting the tight, symbiotic relationship between the corals and the algae, to the point that corals are dying all over the world. One common prediction is that corals will simply migrate north and build reefs where the water is cooler, but more frequent freezes in Florida will prevent corals from escaping north and reestablishing reefs away from the tropics.