Study reveals clues about the origin of crystals that formed more than 4.5 billion years ago 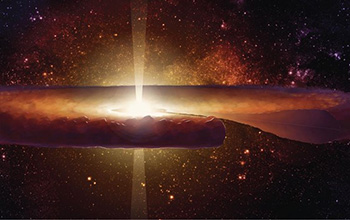 Artist's illustration of the early solar system, at a time when no planets had formed yet

A research team led by the University of Arizona has reconstructed the history of a dust grain that formed during the birth of the solar system more than 4.5 billion years ago. The findings provide insights into the fundamental processes underlying the formation of planetary systems, many of which are still shrouded in mystery.

For the study, the team developed a new framework that combines quantum mechanics and thermodynamics to simulate the conditions to which the grain was exposed during its formation. The solar system then was a swirling disk of gas and dust known as a protoplanetary disk or solar nebula.

Comparing the predictions from the model to an analysis of the grain sample's chemical makeup and crystal structure, along with how matter was transported in the solar nebula, revealed clues about the grain's journey and the environmental conditions that shaped it along the way.

The grain analyzed in the U.S. National Science Foundation-funded study is one of several inclusions known as calcium-aluminum rich inclusions, or CAIs, discovered in a sample from the Allende meteorite, which landed in the Mexican state of Chihuahua in 1969. CAIs are of special interest because they are thought to be among the first solids that formed in the solar system more than 4.5 billion years ago.

Similar to how stamps in a passport tell the story of a traveler's journey, the samples' micro- and atomic-scale structures unlock a record of their formation histories, which were controlled by their environments.

"As far as we know, our paper is the first to tell an origin story that offers clues about the likely processes that happened at the scale of astronomical distances combined with what we see in our sample at the scale of atomic distances," said Tom Zega, first author of the paper published in The Planetary Science Journal.