Discovery came after decades of scientific scrutiny missed it 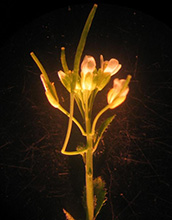 Cantils, named for their cantilever support of a plant stalk, are newly reported structures.

For many, the Thale cress, or Arabidopsis thaliana, is little more than a roadside weed, but the plant has a long history of assisting researchers in understanding how plants grow and develop.

Arabidopsis  was first scientifically described as early as the 16th century, and its first genetic mutant was identified in the 1800s. Since the 1940s, Arabidopsis  has increased in popularity in the scientific community, which continues to use it as a model system to explore plant genetics, development and physiology.

One might expect that after decades of scrutiny the structure of Arabidopsis  had been fully documented, but a new study by scientists Timothy Gookin and Sarah Assmann at Penn State University reveals that this humble plant still has some surprises. The U.S. National Science Foundation-funded researchers describe a previously unreported structure called the cantil, which connects to the stem at one end and hangs in the air to hold up the flower-bearing stalk, similar to the function of a cantilever in structural engineering.

"When I first observed the cantils," said Gookin, "I didn't trust any of the results. I thought it must be an artifact of genetic contamination, perhaps combined with environmental contamination of the water, soil, fertilizer or even the building air supply."

How have cantils eluded scientists for so long? First, cantils are rare. They only develop under certain conditions that cause a plant to delay flowering, such as short day lengths, and only form at the precise point at which the plant begins to flower.

In addition, as Gookin and Assmann discovered, some popular Arabidopsis  strains have genetic mutations that make them incapable of producing cantils at all.

"This is an example of conditional organogenesis regulated by environmental and genetic factors," said Steve Clouse, a program director in NSF's Division of Molecular and Cellular Biosciences, "and demonstrates the novel twists and turns research can take. The original focus of the NSF-supported project was on heteromeric G proteins, a class of signaling molecules now shown to repress cantil formation."

The discovery was reported in the journal Development.