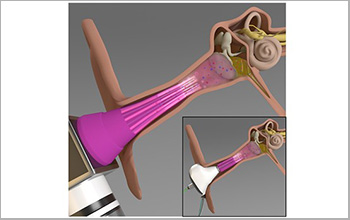 An illustration of the potential new treatment for middle ear infections.

Middle ear infections, also known as otitis media, affect more than 80% of the children in the U.S. In a new study, U.S. National Science Foundation-funded researchers at the University of Illinois Urbana-Champaign have designed a miniaturized 3D-printed device to inactivate Pseudomonas aeruginosa, a common bacterium that causes the infection.

The device -- a microplasma jet array -- generates plasma, which is composed of charged particles and reactive molecules that have been previously shown to inactivate various pathogens. "This is the first time anyone has tried treating middle ear infections using plasma technology," said Jungeun Won, a researcher at the University of Illinois Urbana-Champaign. "Usually, the treatment involves using antibiotics or surgical intervention."

The problem with using antibiotics is two-fold. First, antibiotics are ineffective in more than 30% of the patients with acute infections. Second, their use can lead to increased antibiotic resistance because bacteria form biofilms, aggregates that attach to the surface of the ear.

"Biofilms are very dense, making it difficult for the antibiotics to penetrate," said Helen Nguyen, an engineer at the University of Illinois Urbana-Champaign. "Our idea was that if we could disrupt the structure of the biofilm, we could increase the penetration of the antibiotics."

"We used different duration times for the treatment and found that 15 minutes and longer was effective in inactivating the bacteria," Won said. "We also monitored the tissue to see if we had created any holes or ruptures, but we didn't find any obvious physical damage."

Karl Rockne, a program director in NSF's Directorate for Engineering, added that “the research was focused on 'premise plumbing' biofilms on pipes in homes and other buildings, but it is interesting to see the application outside the water treatment field in a medical application.  This is a great example of broader impacts."