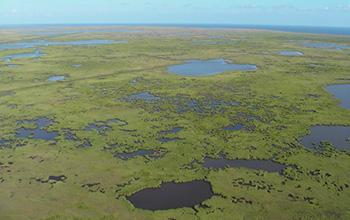 Large-scale wetlands construction may be an effective treatment for farm runoff.

Wetlands constructed along waterways are the most cost-effective way to reduce nitrate and sediment loads in large streams and rivers, according to scientists at the University of California, Irvine; the University of Kansas; the University of Minnesota and other institutions. Rather than focusing on individual farms, the researchers suggest that conservation efforts should be implemented at the watershed scale.

For a study published in Proceedings of the National Academy of Sciences, the team relied on computer modeling to examine the Le Sueur River Basin in southern Minnesota, a watershed that is part of the larger Mississippi Basin and subject to runoff from intense agricultural production of corn and soybeans -- crops characteristic of the entire Upper Midwest region.

"Excessive nitrate or sediment affects local fish populations, the amount of money we have to spend to treat drinking water, and there's a downstream effect also," said lead author Amy Hansen, a civil, environmental and architectural engineer at the University of Kansas.

"Our rivers integrate what's happening across the landscape, so that location where you love to go and fish or swim -- whether that continues to be a great place to fish or swim has a lot to do with the choices people are making farther upstream. Excess pollution goes to a water body downstream like a reservoir or the ocean and causes algal blooms or 'dead zones.' The dead zone in the northern Gulf of Mexico is directly correlated with nitrate that comes from the Mississippi River Basin."

The research team compared potential watershed approaches to improving water quality, such as cutting runoff from farms and adding wetlands, then gauged the economic costs of each. Because most methods rely on voluntary participation by individual farms and are implemented by a patchwork of different agencies, the researchers found they are less effective.

"This work would not have been possible without the diverse expertise and perspective of hydrologists, ecologists, geomorphologists, biogeochemists, social scientists and environmental economists," said lead principal investigator Efi Foufoula-Georgiou of the University of California, Irvine.

The collaboration was supported by a grant from the U.S. National Science Foundation. "This research points the way toward managing runoff pollution effectively," said Bruce Hamilton, a program director in NSF's Directorate for Engineering.