Ecologists develop a theory about how plants 'pay' their symbiotic microbes 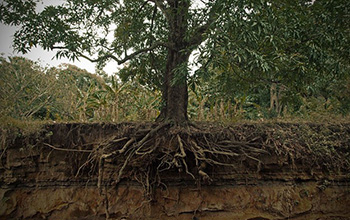 Ecologists have developed a theory about how plants 'pay' their microbes.

"Equal pay for equal work," a motto touted by many people, turns out to be relevant to the plant world as well. According to U.S. National Science Foundation-funded research by Stanford University ecologists, plants allocate resources to their microbial partners in proportion to how much they benefit from that partnership.

"The vast majority of plants rely on microbes to provide them with the nutrients they need to grow and reproduce," said researcher Brian Steidinger at Stanford University. "The problem is that these microbes differ in how well they do the job. We wanted to see how the plants reward their microbial employees."

In a study published in American Naturalist, the researchers investigated this question by analyzing data from several studies that detail how different plants "pay" their symbionts with carbon relative to the "work" those symbionts perform for the plants -- in the form of nutrients like phosphorus and nitrogen.

What the scientists found is that plants don't quite achieve "equal pay" because they don't penalize low-performing microbes as much as would be expected in a truly equal system. The researchers were able to come up with a simple mathematical equation to represent most of the plant-microbe exchanges they observed.

"It's a square root relationship," said biologist Kabir Peay at Stanford University. "Meaning, if microbe B does one-quarter as much work as microbe A, it still gets 50% as many resources -- the square root of one-quarter."

The researchers suggest that, like a human trying to detect the volumes of specific noises in a loud room, a plant making optimal payment decisions may be relatively insensitive to differences in the quality of its microbial employees. Researchers argue that this insensitivity may be for the best, as it encourages plants to maintain a certain level of microbial diversity that can help give the plant options for dealing with the environmental changes it encounters throughout its lifetime.

Matt Kane, a program director in NSF's Division of Environmental Biology, added that “maintaining microbial diversity is an important and unexpected outcome of the mechanisms by which plants share resources with their underground partners."