Discovery harkens back to research in the 1800s 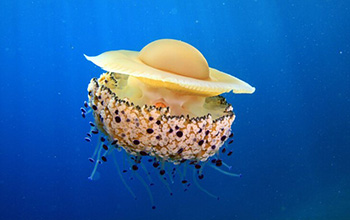 In the late 1800s, scientists were stumped by the "yellow cells" they were observing in the tissues of certain temperate marine animals, including sea anemones, corals and jellyfish. Were these cells part of the animal or separate organisms? If separate, were they parasites or did they confer a benefit to the host?

In a paper published in the journal Nature in 1882, biologist Sir Patrick Geddes of Edinburgh University proffered that not only were these cells distinct entities, they were also beneficial to the animals in which they lived.

He assigned them to a new genus, Philozoon -- from the Greek phileo, meaning "to love as a friend," and zoon, meaning "animal" -- and then changed his career direction to urban planning and design. Over time, Geddes's scientific contributions were largely forgotten, and the Philozoon genus name was never used.

Now researchers at Penn State and other institutions have revisited these yellow cells, which, after Geddes, were determined to be photosynthetic algae in the family Symbiodiniaceae. In a  U.S. National Science Foundation-funded study published in the European Journal of Phycology, the team resurrected the genus Philozoon by using modern technologies to characterize two species of algae Geddes had investigated, along with six new related species.

"Patrick Geddes was ahead of his time in recognizing the ecological significance of the yellow cells -- micro-algal symbionts -- inside an animal's tissues, creating a photosynthetic animal," said Todd LaJeunesse, lead author of the paper. "We now know that microorganisms live in partnership with all multicellular organisms; for example, the bacteria that comprise our human gut microbiomes are essential for our overall health. By reviving the Philozoon genus, we are honoring the work of this natural historian."