For female vampire bats, an equal chance to rule the roost

Researchers observe an egalitarian approach to living together 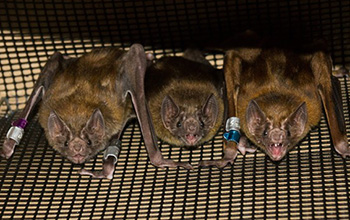 For female vampire bats, there's an equal chance to rule the roost, scientists are finding.

Female vampire bats establish an egalitarian community in a roost rather than a society based on a clear hierarchy of dominance that is often seen in animal groups, a new study suggests.

U.S. National Science Foundation-funded researchers at The Ohio State University observed more than 1,000 competitions for food among a colony of 33 adult female bats and juveniles living in captivity, assigning a rank to each bat based on a calculation of wins and losses in those contests.

The team found that, unlike in many mammal societies, the higher-ranking bat did not necessarily win every bout over food, and there was a randomness to the ranking order -- no specific quality they measured gave a bat a better chance at dominance, so any adult female had an equal opportunity to rank very high or very low on a scale of dominance in the roost.

Traditionally, research on group-living animals -- especially primates -- in the wild has focused on how a dominance structure factors into survival, longevity and healthy offspring, and only later considered the importance of friendship in those same communities.

Senior study author Gerald Carter worked in reverse order. His research on highly social female vampire bats, whose behaviors resemble what has been observed in some primate groups, focused on cooperation, finding that vampire bats make friends through a gradual buildup of trust and show signs of maintaining those friendships in the wild.

"We realized we don't know anything about dominance among female vampire bats, so this is a first step in the direction of trying to identify how similar they are to primates in this way," said Carter. "We can say quite clearly that they're definitely not like some of the well-studied primates. They don't have a very clear social rank that they're constantly enforcing."

The study is published in the journal Royal Society Open Science.

"Despite the fact that vampire bats have long provided textbook examples of cooperation in vertebrates, this work illustrates how much we still have to learn about cooperation in this group, and the important ways in which their social groups differ from other group-living vertebrates with strong dominancy hierarchies, such as those found in many primates," said Patrick Abbot, a program director in NSF's Division of Integrative Organismal Systems.