How ethane-consuming archaea pick up their favorite dish

Scientists decode structure of the enzyme responsible for ethane fixation 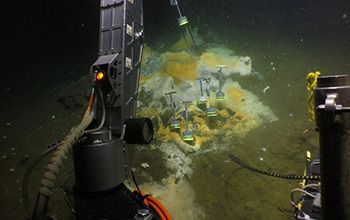 Researchers used the submersible ALVIN to collect samples from the seafloor.

U.S. National Science Foundation-funded researchers have discovered ethane-degrading microbes at hydrothermal vents in the Gulf of California's Guaymas Basin at a water depth of 2,000 meters. The results are published in the journal Science.

"Many new discoveries are being made in the oceans, and this unique microbial metabolism of a natural hydrocarbon shows there is still more to learn," says Mike Sieracki, a program director in NSF's Division of Ocean Sciences.

The researchers named the microbes Ethanoperedens thermophilum, meaning "heat-loving ethane-eaters." The ethane is consumed by microorganisms that form a so-called consortium: archaea, which break down the natural gas, and bacteria, which couple the electrons released in the process to the reduction of sulfate, an abundant compound in the ocean.

Some natural gas components such as propane or butane can be broken down by bacteria alone. But to degrade the main components of natural gas -- methane and ethane – the two organisms are necessary.

The discovery of the ethane-eating microbes has brought a new direction to research in this field. Compared to microbes eating methane, which normally take a lot of time to grow, these ethane specialists grow much faster, doubling every week, the scientists found. Biomass production time is reduced, and reactions are faster in key enzymes catalyzing the oxidation of natural gas.

The enzyme structure shows how these microbes from geothermally active vents became specialized in ethane capture. The work is leading to a deeper understanding of the first step in ethane degradation, the only source of energy for the archaea, the scientists say. The finding that the enzyme responsible has specific traits for recognizing ethane is a big step forward, the researchers believe.