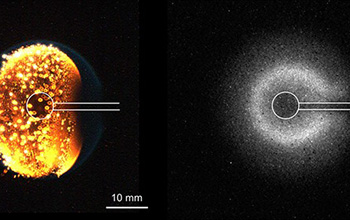 An entirely new class of fire, spherical cool diffusion flames, or simply "cool flames," has been documented aboard the International Space Station. The discovery of these dim, quiet flames -- led by U.S. National Science Foundation-funded fire protection engineer Peter Sunderland at the University of Maryland -- could ignite development of the combustion engine of the future.

"This discovery transforms our understanding of what fire can be and what it can do," said Sunderland. "The goal of our research is to understand the particular processes ongoing in spherical cool diffusion flames. If we can understand and model how they work, then we might be able to harness cool flames to design a new class of clean combustion engine."

Cool flames are also somewhat mysterious. As recently as 10 years ago, cool flames had only been theoretically predicted. First observed during an experiment aboard the space station in 2012, the cool flames appeared only briefly before the liquid fuel was depleted. The sighting catalyzed an emerging, rapidly growing field in combustion research.

"Little is known about combustion chemistry at these temperatures," Sunderland said. "Part of what we're learning is how much we didn't know.”

To advance fundamental understanding of the nature of cool diffusion flames, Sunderland and his collaborators, including Richard Axelbaum at Washington University in St. Louis and Forman Williams at the University of California, San Diego, launched an experiment in late 2020 designed to generate controlled cool flames that burn steadily for at least two minutes.

In a first for microgravity flame research, they achieved this feat -- with the help of astronauts aboard the space station testing a variety of gas fuels -- on June 23, 2021. This is the first time spherical cool diffusion flames have been observed burning gaseous fuels.

John Daily, a program director in NSF's Directorate for Engineering, said that "this type of finding is why NSF funds fundamental research. Unexpected but important, it was only discovered due to careful scientific work."