Results underscore concern for health and well-being of people, wildlife and waterways 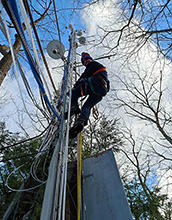 Researchers led by University of Massachusetts Lowell environmental scientist Daniel Obrist say mercury measurements in a Massachusetts forest indicate the toxic element is deposited in forests across the globe in much greater quantities than previously understood.

The team's results underscore concern for the health and well-being of people, wildlife and waterways, according to Obrist, as mercury accumulating in forests ultimately runs off into streams and rivers, ending up in lakes and oceans.

Mercury is a toxic pollutant that threatens fish, birds, mammals and humans. Hundreds of tons are released into the atmosphere each year by coal-burning power plants, as well as through gold mining and other industrial processes, and the pollutant is distributed by winds and currents across the globe.

Forests are the world's most abundant, productive and widespread ecosystems on land, according to Obrist, who said the study is the first to look at a full picture of how mercury in the atmosphere is deposited at any rural forest in the world, including the deposition of mercury in its gaseous form, which most previous studies do not address.

The results of the project, supported by the U.S. National Science Foundation, are published in Proceedings of the National Academy of Sciences.

Sylvia Edgerton, a program director in NSF's Division of Atmospheric and Geospace Sciences, said that "having a better understanding of the processes that control the land-atmosphere exchange of mercury is important for achieving a better representation of mercury cycling across the atmosphere-forest-soil interface."

Added Obrist, "Our study suggests that mercury loading in forests has been underestimated by a factor of about two and that forests worldwide may be a much larger global absorber and collector of gaseous mercury than currently assumed. This larger than anticipated accumulation may explain surprisingly high mercury levels observed in soils across rural forests."