Making clean hydrogen is hard, but researchers have solved a major hurdle 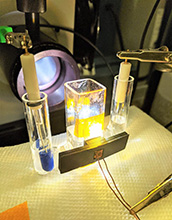 For decades, researchers around the world have searched for ways to use solar power to generate the key reaction for producing hydrogen as a clean energy source -- splitting water molecules to form hydrogen and oxygen. However, such efforts have mostly failed because doing it well was too costly and trying to do it at a low cost led to poor performance.

Now, researchers from The University of Texas at Austin have found a low-cost way to solve one-half of the equation, using sunlight to efficiently split off oxygen molecules from water. The U.S. National Science Foundation-funded finding, published in Nature Communications, is a step toward greater adoption of hydrogen as a key part of energy infrastructure.

"These conflicting requirements drive you toward a seemingly inevitable tradeoff, but by combining multiple materials -- one that efficiently absorbs sunlight, such as silicon, and another that provides good stability, such as silicon dioxide -- into a single device, this conflict can be resolved."

The key to a breakthrough came through a method of creating electrically conductive paths through a thick silicon dioxide layer that can be performed at low cost and scaled to high manufacturing volumes.