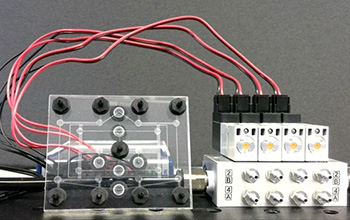 Engineers at University of California, Riverside have unveiled an air-powered computer memory that can be used to control soft robots. The innovation overcomes one of the biggest obstacles to advancing soft robotics: the fundamental mismatch between pneumatics and electronics. The U.S. National Science Foundation-funded work is published in PLOS One.

Pneumatic soft robots use pressurized air to move soft, rubbery limbs and grippers, and are superior to traditional rigid robots for performing delicate tasks. They are also safer for humans to be around. Baymax, the health care companion robot in the 2014 animated film Big Hero 6 is a pneumatic robot for good reason.

"Pneumatic logic" predates electronic computers and once provided advanced levels of control in products from thermostats and other components of climate control systems to player pianos. In pneumatic logic, air, not electricity, flows through circuits or channels, and air pressure is used to represent on/off or true/false. In modern computers, these logical states are represented by 1 and 0 in code to trigger or end electrical charges.

Pneumatic soft robots need a way to remember and maintain the positions of their moving parts. The researchers realized that if they could create a pneumatic logic "memory" for a soft robot, they could eliminate the electronic memory currently used for that purpose.

The valves remain sealed against a pressure differential even when disconnected from an air supply line, creating trapped pressure differentials that function as memories and maintain the states of a robot's actuators. Dense arrays of these valves can perform advanced operations and reduce the expensive, bulky and power-consuming electronic hardware typically used to control pneumatic robots.