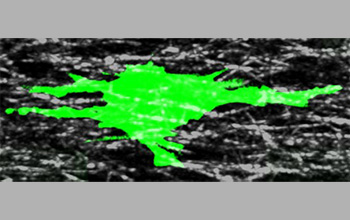 Scientists are discovering clues to a mystery about cell movement.

A new study led by University of Minnesota Twin Cities researchers shows that the stiffness of protein fibers in tissues like collagen, is a key component in controlling the movement of cells. The U.S. National Science Foundation-funded discovery could have a major impact on fields that study cell movement, from regenerative medicine to cancer research.

The research is published in Proceedings of the National Academy of Sciences .

Directed cell movement, or what scientists call "cell contact guidance," refers to a phenomenon in which the orientation of cells is influenced by the alignment of fibers in soft tissues. Cells have protrusions, almost like multiple little arms, that move them in the tissue. Cells obviously don't have eyes to sense where they are going, so understanding the mechanisms for how they align their movement with these fibers is a final frontier in controlling cell migration.

"It's kind of like if someone dropped you in a swimming pool filled with water and thousands of skinny ropes aligned along the length of the pool and told you to swim laps, then turned off the lights," said Robert Tranquillo, an engineer at the University of Minnesota and senior researcher on the study. "You'd reach out your arms and legs to try to move through the water and figure out the right direction using the ropes."

Cells need to move for many reasons. They must move to the right places in a developing embryo to become the right cell types. In wound healing, skin cells need to enter into blood clots efficiently to convert the wound into a scar. Research shows that when cancer cells migrate away from solid tumors to spread throughout the body, they're following tracks of a line of fibers.

In more recent years, researchers have found that contact guidance is the underlying cellular mechanism by which they can make engineered tissues to regrow, repair or replace damaged or diseased cells, organs or tissues.