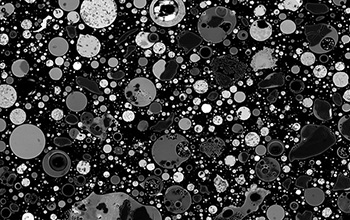 Scientists at Duke University have developed a suite of four new tests that can be used to detect coal ash contamination in soil with unprecedented sensitivity. The tests are designed to analyze soil for the presence of fly ash particles so small that other tests might miss them. The U.S. National Science Foundation-funded results are published in the journal Environmental Science & Technology.

Fly ash is part of coal combustion residuals that are generated when a power plant burns pulverized coal. The tiny fly ash particles, which are often microscopic in size, contain high concentrations of arsenic, selenium and other toxic elements, many of which have been enriched through the combustion process.

While the majority of fly ash is captured by traps in the power plant and disposed of in coal ash impoundments and landfills, some particles escape and are emitted into the environment. Over time, these particles can accumulate in soil downwind from the plant, potentially posing risks to the environment and human health.

"Because of the size of these particles, it's been challenging to detect them and measure how much fly ash has accumulated," said Avner Vengosh. "Our new methods give us the ability to do that -- with high level of certainty."

Coal combustion residuals are the largest industrial solid wastes produced in the United States. When soil contaminated with fly ash is disturbed or dug up, dust containing the ash can be transported through the air into nearby homes and other indoor environments. Inhaling dust that contains fly ash particles with high levels of toxic metals has been linked with lung and heart disease, cancer, nervous system disorders and other ill effects.

"Being able to trace the contamination back to its source location is essential for protecting public health and identifying where remediation efforts should be focused," said Zhen Wang, who led the study. "These new methods complement tests we've already developed for tracing coal ash in the environment, and expand our range of investigation."

The new tests are designed to be used together to provide independent corroborations of whether fly ash particles are present in a soil sample and if so, at what proportion to the total soil.

Julie Pett-Ridge, a program director in NSF's Division of Earth Sciences, added that "the combination of these specific geochemical tools is a powerful approach, establishing a reliable means of detecting the potential environmental risks of coal ash in surface soils."