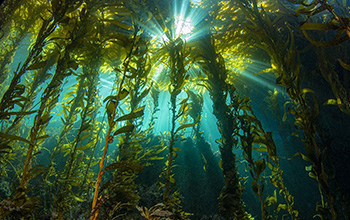 Researchers are finding that giant kelp is crucial to California coastal ecosystems.

A lush canopy is a defining feature of most of Earth's forests, but canopy-forming species can be particularly vulnerable to disturbances and environmental change -- even those in forests under the sea.

U.S. National Science Foundation-funded researchers at the University of Virginia and the University of California, Santa Barbara, are looking at how the growth of kelp forests changes when its biggest species, giant kelp, is no longer present. The study was conducted at NSF's Santa Barbara Coastal Long-Term Ecological Research site.

"Primary productivity is the fuel that powers ecosystems and the basis for biodiversity, nutrient cycling and carbon sequestration, so understanding what controls it is one of the most important questions in ecology," said Max Castorani, a marine ecologist at UVA.

After a 10-year experiment that involved repeatedly removing giant kelp from ecosystems, Castorani and colleagues discovered that while smaller understory algae did take advantage of the brighter conditions that resulted, the understory vegetation could not compensate for the lost productivity of giant kelp, a marine seaweed that scientists have dubbed the "sequoia of the sea."

The team's work, published in Ecology Letters, concludes that the canopy-forming giant kelp plays a fundamental role in driving the productivity of the coastal ecosystems to which it belongs.

“This study is particularly important in the context of climate change,” said Dan Thornhill, a program director in NSF’s Division of Ocean Sciences. “Giant kelp is known to decline and die when ocean temperatures are too warm. As the Pacific Ocean continues to warm, the results from this work suggest that compensatory growth from other algae will not replace the productivity and services provided by giant kelp.”

Speculating that understory vegetation might compensate for the loss of giant kelp, the team devised an experiment that would mimic the conditions created by natural disturbances, such as ocean storms and heat waves, by clearing the canopy from patches of forest and then recording how much light reached the forest floor and how much growth was produced by the exposed understory.

Because giant kelp grows and dies quickly, the researchers were able to look at many cycles of disturbance and recovery over the course of 10 years. A similar study could have taken decades or centuries in a terrestrial forest, said study co-author Dan Reed, a biologist at UC Santa Barbara.