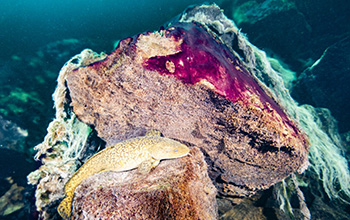 A burbot fish resting on microbial mats inside the Middle Island Sinkhole in Lake Huron.

The rise of oxygen levels early in Earth's history paved the way for the spectacular diversity of animal life. But for decades, scientists have struggled to explain the factors that controlled this gradual and stepwise process, which unfolded over nearly 2 billion years.

Now an international research team is proposing that increasing day length on the early Earth -- the spinning of the young planet gradually slowed over time, making the days longer -- may have boosted the amount of oxygen released by photosynthetic cyanobacteria, thereby shaping the timing of Earth's oxygenation.

Their conclusion was inspired by a study of present-day microbial communities growing under extreme conditions at the bottom of a submerged Lake Huron sinkhole, 80 feet below the water's surface. The water in the Middle Island Sinkhole is rich in sulfur and low in oxygen, and the brightly colored bacteria that thrive there are considered good analogs for the single-celled organisms that formed mat-like colonies billions of years ago, carpeting both land and seafloor surfaces.

The researchers show that longer day length increases the amount of oxygen released by photosynthetic microbial mats. That finding, in turn, points to a previously unconsidered link between Earth's oxygenation history and its rotation rate. While the Earth now spins on its axis once every 24 hours, day length was possibly as brief as six hours during the planet's infancy.

The U.S. National Science Foundation-funded findings were published in the journal Nature Geoscience.

"Our research suggests that the rate at which the Earth is spinning -- in other words, its day length -- may have had an important effect on the pattern and timing of Earth's oxygenation," said co-author Gregory Dick of the University of Michigan.

The scientists simulated the gradual slowing of Earth's rotation rate and showed that longer days would have boosted the amount of oxygen released by early cyanobacterial mats in a manner that helps explain the planet's oxygenation events.