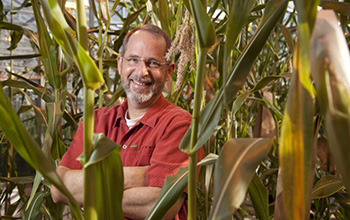 The newly assembled genomes of 26 different genetic lines of corn illustrate the crop's rich genetic diversity and lay the groundwork for a better understanding of what genetic mechanisms account for the crop traits prized by farmers.

The U.S. National Science Foundation-funded mapping of the genomes, published recently in the journal Science, was a team effort co-led by Kelly Dawe, a plant geneticist at the University of Georgia.

"For much of the modern genetic era, we relied on a single genome and compared everything to it, but we have learned that one genome doesn't have all the genes," said Dawe. "It is like having one golf club, one socket wrench or one set of clothes. We, as a community, have been slowly trying to shift our approach to include multiple references. Our goal was to shift maize genomics in one large leap from one reference to 26."

Dawe worked on the project with a team including Matthew Hufford, first author on the paper and an organismal biologist at Iowa State University, where the analysis was performed.

The first corn genome mapped was the genetic line known as B73, a line developed at Iowa State University and completed in 2009. Since then, B73 has served as the primary reference genome for corn, with a handful of additional genome assemblies becoming available only in the last few years. That means scientists have a limited understanding of genetic sequences in other corn genomes that aren't present in B73.

The 26 genomes mapped in the new study encompass a wide range of genetic diversity, covering everything from popcorn to sweetcorn to field corn from various geographic areas and environmental conditions.

Hufford said the genetic diversity present in corn created major hurdles for the assembly of the new genomes. He said 85% of the corn genome is composed of transposable elements, or patterns that repeat throughout the genome. Hufford compared those transposable elements to a jigsaw puzzle in which the majority of pieces are a single color. All that repetition makes it difficult to figure out how the parts fit together.

"If you can't find a unique color or shape that tells you where to put the puzzle piece, you're in a world of hurt," Hufford said. "But if you get slightly larger puzzle pieces with unique features, that simplifies the process."