Wildfire smoke may lead to less rain in the western US 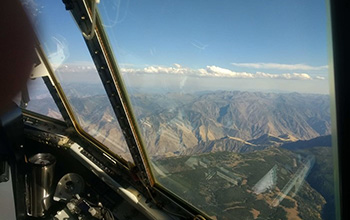 When wildfires send smoke up into the atmosphere, tiny particles fly up with it. Water droplets can condense on the particles in clouds.

U.S. National Science Foundation-funded researchers expected an increase in the number of water droplets forming in clouds as a result of wildfires, because more particles create more droplets. But the difference between smoky and clean clouds was bigger than expected, with smoky clouds hosting about five times the number of droplets as their clean counterparts. Smoky droplets were also half the size of pristine droplets.

That size difference is what could stop the drops from falling. Because small droplets are less likely to grow and eventually fall out as rain, wildfires in the western U.S. could mean less rain during wildfire season, according to the study published in the AGU journal Geophysical Research Letters.

"We were surprised at how effective these primarily organic particles were at forming cloud droplets and what large impacts they had on the microphysics of the clouds," said lead author Cynthia Twohy, an atmospheric scientist at NorthWest Research Associates and Scripps Institution of Oceanography.