Uncovering the botanical history of the Guadalupe Mountains 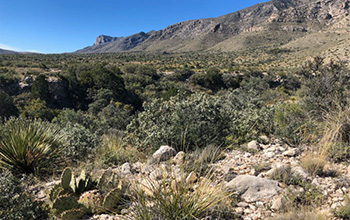 The Chihuahuan Desert creates a barrier to dispersal of many plants.

Botanists at Texas Tech University recently tested a new genetic resource on plants from the Guadalupe Mountains, a region that boasts some of the most diverse ecosystems in Texas. Called Angiosperms353, the resource -- a massive, standardized set of genes common in flowering plant species -- has the potential to help unravel the 500-million-year history of land plants while also providing a conservation roadmap to protect vulnerable species.

It was with this last goal in mind that U.S. National Science Foundation-funded researchers sequenced the DNA of plant specimens collected nearly 50 years ago, when the Guadalupe Mountains were first designated a national park.

"The world is rapidly changing, and we need innovative tools if we are to protect the globe's plants and animals," said Sam Scheiner, a program director in NSF's Division of Environmental Biology. "These researchers have produced just such a new tool."

The scientists published their results in the journal Applications in Plant Sciences.

"By comparing specimens, we can try to figure out exactly how rising temperatures and changes in weather and land use have affected these populations," said lead author Madeline Slimp.

Located in the northern spur of the Chihuahuan Desert, the Guadalupe Mountains are the remains of an ancient coral reef and limestone seafloor that was uplifted by tectonic instability in the region beginning about 20 million years ago. In that span of time, the peaks have been thrust up to over 5,000 feet above the surrounding sand dunes.

This abrupt change in elevation allows many rare plant ecosystems to thrive in the desert, including temperate forests, grasslands, dry slopes of cactus and creosote, and peaks crowned with firs and pine. Their distance from other ranges, such as the Rockies to the north or the Apache Mountains to the south, has also meant that many of the native plants have evolved there in isolation and can be found nowhere else on Earth.

"We can learn something about the health of a population from the amount of genetic diversity there is within species," said Matt Johnson, senior author of the study. "That can tell us whether a particular species is in peril."