These bacteria clean up radioactive waste

Research reveals 'sponge' made by Geobacter can soak up uranium 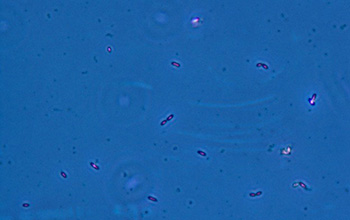 Research reveals that a 'sponge' made by Geobacter can soak up uranium.

For decades, scientists suspected that bacteria known as Geobacter could clean up radioactive uranium waste, but it wasn't clear how the microbes did it.

"The biological mechanism remained elusive for 20 years," said Gemma Reguera, the Michigan State University microbiologist whose team solved much of the mystery a decade ago. She's now cracked the rest of the case.

What Reguera discovered in 2011 was that Geobacter makes protein filaments on one side of its cells that act like wires to "zap" uranium. That does two things. For one, the jolt triggers chemical reactions that give the bacteria energy. Secondly, that chemistry traps the uranium in a mineral form, preventing the radioactive material from spreading through the environment.

But those protein wires accounted for just about 75% of the uranium the Geobacter were cleaning up.

"We always knew we were missing something," said Reguera. "What we didn't know was what was happening at the cell surface, particularly on the side of the cell that had no wires to immobilize the uranium."

Now, the U.S. National Science Foundation-funded team has the answer: Molecules called lipopolysaccharides coat the cell surface and soak up the uranium like a sponge. "This finding is significant in revealing the strategy for uranium detoxification and mineralization Geobacter sulfurreducens uses, and which may be applicable to other metals,” said Enriqueta Barrera, a program director in NSF's Division of Earth Sciences.

Published in the journal Applied and Environmental Microbiology, the results could create new ways to remediate dangerous pollution, and to recycle and reclaim increasingly scarce metals from electronic waste. The next step, Reguera said, is investigating whether Geobacter and its sponges can be encouraged to pull other toxic metals from waste streams.