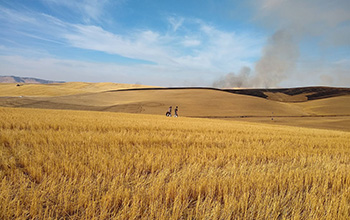 U.S. National Science Foundation-funded researchers at Washington State University have developed a way to assess soil health by measuring the electric current produced by its  microbes.

The team used a probe originally developed to measure the electrochemical signal of microbes in aquatic environments and tested it on healthy and unhealthy soil samples to measure microbial metabolism and other indicators of soil health.

"Soil health is important to feeding a growing population," said Brandi Schottel, a program director in NSF's Directorate for Engineering. "Detecting healthy soils to identify healthy ecosystems and to promote productive agriculture is a critical first step in protecting this valuable resource as we demand more from our environment."

The proof-of-concept research, published in Journal of Electrochemical Society, could lead to a simple, real-time test for farmers to determine whether soil is productive.

"Soil underpins all the food we eat, and most of it is degraded worldwide," said Maren Friesen, a researcher at Washington State University and co-author of the study. "One of the biggest barriers to improving soils is not being able to have rapid, real-time measurements to develop appropriate management strategies for them. This sensor has the potential to do real-time measurements not just of the structure of the soil, but how it's actually functioning. It would be a huge advance in the field."

"This will have a high impact on soil health determination," added Haluk Beyenal, corresponding author on the paper. Other co-authors on the study include Abdelrhman Mohamed, Eduardo Sanchez and Natalie Sanchez.

Soil health is critically important to agriculture and crop success worldwide, but measuring it is not straightforward. Farmers and researchers use soil chemistry, nutrient analysis, texture and pH measurements to gain understanding of soil's physical and chemical properties. While that information can be valuable, it doesn't always reflect how productive the soil actually is.

That's because a key to soil productivity is how its microbes function, said Friesen. Billions of bacteria, fungi and other organisms play critical roles in nutrient mobilization and provisioning, defense against pathogens and plant growth. But, until now, there has been no simple, real-time way to measure the microbial activity. "What makes soil beneficial for a plant is that it is alive and contains all these bacteria and fungi," said Friesen.

In the new paper, the research team was able to measure current through the soil to determine microbial activity and distinguish healthy and unhealthy soils.