Metabolism changes with age, but not when people might think 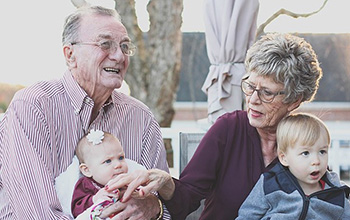 Science shows that, pound-for-pound, a 1-year-old burns calories 50% faster than an adult.

Most people remember a time when they could eat anything they wanted and not gain weight. But a study published in the journal Science and funded in part by the U.S. National Science Foundation suggests that metabolism -- the rate at which calories burn -- actually peaks much earlier in life and starts its inevitable decline later than you might guess.

"There are lots of physiological changes that come with growing up and getting older," said study co-author Herman Pontzer, an evolutionary anthropologist at Duke University. "Think puberty, menopause, other phases of life. What's weird is that the timing of our 'metabolic life stages' doesn't seem to match those typical milestones."

Pontzer and an international team of scientists analyzed the average calories burned by more than 6,600 people ranging from 1-week-old to age 95 as they went about their daily lives in 29 countries.

Previously, most large-scale studies measured how much energy the body uses to perform basic vital functions such as breathing, digesting, pumping blood -- in other words, the calories needed just to stay alive. But that amounts to only 50% to 70% of the calories burned each day. It doesn't take into account the energy spent doing everything else: washing the dishes, walking the dog, breaking a sweat at the gym, even just thinking or fidgeting.

To come up with a number for total daily energy expenditure, the researchers relied on the "doubly labeled water" method. It's a urine test that involves having a person drink water in which the hydrogen and oxygen in the water molecules have been replaced with naturally occurring "heavy" forms, and then measuring how quickly it's flushed out.

Pooling and analyzing energy expenditures across the entire lifespan revealed some surprises. Some people think of their teens and 20s as the age when calorie-burning potential hits its peak, but the researchers found that, pound for pound, infants had the highest metabolic rates of all.

The research lends support to the idea that it's more than age-related changes in lifestyle or body composition at work.

"All this points to the conclusion that tissue metabolism, the work the cells are doing, is changing over the course of the lifespan in ways we haven't fully appreciated before," Pontzer said.

Robin Bernstein, a program director in NSF's Division of Behavioral and Cognitive Sciences, added, "These researchers produced a new perspective on metabolic shifts during the course of human life. It generates more questions -- and new ways in which this knowledge can be applied. Metabolism is clearly more complicated than we thought."