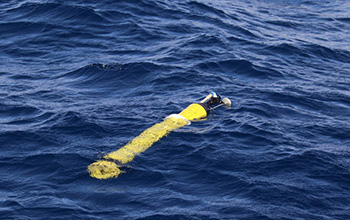 Microscopic marine life plays a fundamental role in the health of the ocean and, ultimately, the planet. Just like plants on land, tiny phytoplankton use photosynthesis to consume carbon dioxide and convert it into organic matter and oxygen. This biological transformation is known as marine primary productivity.

In a U.S. National Science Foundation-funded study in Nature Geoscience, Monterey Bay Aquarium Research Institute scientists Ken Johnson and Mariana Bif demonstrated that a fleet of robotic floats could revolutionize our understanding of primary productivity in the ocean on a global scale.

"Because the global ocean is vast, and only occasionally sampled by research ships, much of the data and properties we need to construct and validate ocean-earth systems models are lacking," said Peter Milne, a program director in NSF's Office of Polar Programs. "With hundreds, and soon perhaps thousands, of robotic profilers, a new understanding of the oceans has been opened, as well as an array-based approach to how the oceans work in the climate system."

Data collected by the floats will allow scientists to more accurately estimate how carbon flows from the atmosphere to the ocean and shed new light on the global carbon cycle. Changes in phytoplankton productivity can have profound consequences, like affecting the ocean's ability to store carbon and altering ocean food webs. In the face of a changing climate, understanding the ocean's role in taking carbon out of the atmosphere and storing it for long periods of time is imperative, scientists say.

"Based on imperfect computer models, we've predicted that primary production by marine phytoplankton will decrease in a warmer ocean, but we didn't have a way to make global-scale measurements to verify models. Now we do," said Johnson.

The BGC-Argo profiling floats, as they’re known, measure temperature, salinity, oxygen, pH, chlorophyll and nutrients. When scientists first deploy a BGC-Argo float, it sinks to 1,000 meters, or 3,300 feet, deep and drifts at this depth. Then, its autonomous programming gets to work profiling the water column.

The float descends to 2,000 meters -- 6,600 feet -- then ascends to the surface. Once at the surface, the float communicates with a satellite to send its data to scientists on shore. This cycle is then repeated every 10 days. The floats capture thousands of profiles every year.