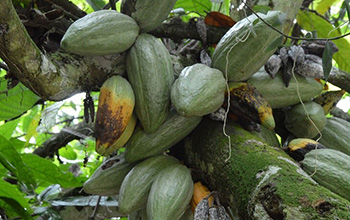 A comparison of the genomes of multiple strains of the cacao tree by a team of researchers has provided insights into the role genomic structural variants play in the regulation of gene expression and chromosome evolution, giving rise to the differences in populations of the plant.

The U.S. National Science Foundation-funded study, which has implications for plant genetics in general, would not have been possible before powerful computers made the high-resolution sequencing of genomes possible, affordable and relatively fast, according to Mark Guiltinan, a plant molecular biologist at Penn State.

"The genomes of different populations of cacao trees are 99.9% identical, but it's the structural variants in that one-tenth of 1% of their genomes that accounts for the plant's diversity in different regions and its adaptation to climate and various diseases," Guiltinan said. "This study makes an association between structural variation and the ability of a plant to adapt to a local environment."

The researchers investigated the fitness consequences of genomic structural variants in natural populations by analyzing and comparing chromosome-scale genome assemblies of 31 naturally occurring populations of Theobroma cacao, the long-lived tree species that is the source of chocolate. Among those 31 strains of cacao, the scientists found more than 160,000 structural variants.

In findings published in Proceedings of the National Academy of Sciences, the researchers reported that most structural variants are deleterious and thus constrain adaptation of the cacao plant. These detrimental effects likely arise as a direct result of impaired gene function and as an indirect result of suppressed gene recombination over long periods of time, they noted.

However, despite the overall detrimental effects, the study also identified individual structural variants bearing signatures of local adaptation, several of which are associated with genes differentially expressed between populations. Genes involved in pathogen resistance are among these candidates, highlighting the contributions of structural variants to important local adaptation traits.

"This research nicely shows evolution at work," said Gerald Schoenknecht, a program director in NSF's Division of Integrative Organismal Systems. "Most mutations or structural variants are deleterious, but once in a while there is one that enables the organism to better cope with a specific environment or pathogen."