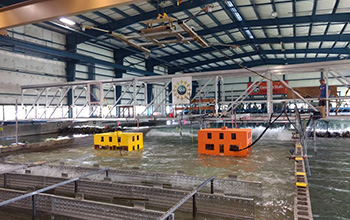 "We wanted to establish a way to build scaled wood-frame specimens that would behave, and ultimately fail, under wave loading like their full-scale counterparts have been observed to do," said Sean Duncan, who led the study. "We also set out to develop an equation that could predict the distribution of the uplift pressure on elevated structures. We were able to accomplish both of those goals."

One of the model structures was elevated -- built so the living areas would be off the ground -- and the other was "on-grade," or on the ground. As the researchers expected, the on-grade model couldn't withstand water levels as high as the raised one, and both sustained damage in ways consistent with what was seen in real residential structures during Hurricane Sandy in 2012 and Hurricane Ike in 2008.

The U.S. National Science Foundation-funded research was published in Coastal Engineering. “This research is vital to helping mitigate in future hurricanes the widespread damage to homes and other structures that happened during Hurricane Ida,” said Joy Pauschke,  a program director in NSF’s Directorate for Engineering.

The research by Duncan, Oregon State University colleagues Dan Cox, Andre Barbosa and Pedro Lomonaco, and collaborators from the University of Hawaii and the University of California, Berkeley, also showed that a remote sensing method known as LiDAR could track the models' damage progression as the waves and storm surges increased in intensity.

The models were built to one-sixth scale, with strength and stiffness on par with real residences such as those hit by Hurricane Sandy in Ortley Beach, New Jersey, and by Hurricane Ike on Texas' Bolivar Peninsula. Each of those storms caused extensive damage, which focused greater attention on coastal communities' vulnerability to waves and storm surges, and on learning more about how to design and construct storm-resistant homes, Duncan said.

"Populations in those types of communities are rising, and so are sea levels," said Duncan. "That means the risk associated with hurricanes is rising too, especially because research indicates that hurricanes are increasing in intensity and will continue to do so. That's why it's so important to understand the forces these storms generate and how coastal structures respond, so planners and the construction industry can work together to mitigate the potential damage from these very likely, very potent storms."