For copepods, no free lunch in climate change

Challenges for this small marine animal have ripple effects 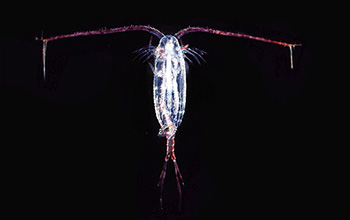 The world's oceans are becoming increasingly stressful places for marine life, and scientists are working to understand what that means for the future. From rising temperatures to ocean acidification to changes in currents, the challenges are multifaceted, making projections difficult.

Copepods are small marine animals that are abundant, widely dispersed and serve as major components of the ocean's food web. U.S. National Science Foundation-funded researchers at the University of Connecticut and other institutions have found that a species of copepod called Acartia tonsa  can cope with climate change, but at a price. The researchers' results were published in Nature Climate Change.

"We have this problem of climate change and in the ocean, it is a multi-dimensional problem because it's not just the warming, the ocean is becoming more acidic where pH is going down as we pump more CO2, into the atmosphere," says Hans Dam, a University of Connecticut marine scientist. "Organisms need to cope, they are under more stress, and things are happening very fast."

The study looks at adaptation across 25 copepod generations and considers both ocean warming and acidification, something that few studies have done.

"The key question is how the copepod of today will fare a hundred or a thousand years from now," says Cynthia Suchman, a program director in NSF's Division of Ocean Sciences. "This team has designed a study that combines ecology and evolution to get closer to understanding the future of ocean biota."