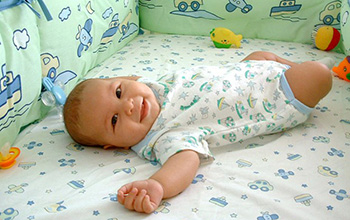 Sugars from human milk could help prevent infections in newborns.

Bacteria known as group B Streptococcus, or GBS, are a common cause of blood infections, meningitis and stillbirth in newborns. Although GBS infections can often be treated or prevented with antibiotics, the bacteria that cause these infections are becoming increasingly resistant.

Now, U.S. National Science Foundation-funded researchers have discovered that human milk oligosaccharides, or HMOs -- short strings of sugar molecules abundant in breast milk -- can help prevent GBS infections in human cells and tissues and in mice. Someday, HMOs might be able to replace antibiotics for treating infections in infants and adults.

The researchers presented their results at the fall meeting of the American Chemical Society.

"Our lab has previously shown that mixtures of HMOs isolated from the milk of several different donor mothers have antimicrobial and antibiofilm activity against GBS," says Rebecca Moore, who presented the work. "We wanted to see whether HMOs could prevent infections in cells and tissues from a pregnant woman, and in pregnant mice." Moore is a researcher in the labs of Steven Townsend at Vanderbilt University and Jennifer Gaddy at Vanderbilt University Medical Center.

According to the U.S. Centers for Disease Control and Prevention, about 2,000 babies in the U.S. get GBS each year, and 4-6% of them die from it.

To figure out which HMOs and other oligosaccharides have these antimicrobial effects and why, the researchers set up an artificial two-species microbiome with GBS and beneficial Streptococcus salivarius growing in a tissue culture plate, separated by a semi-permeable membrane.