Sensor can detect the presence of an element called terbium 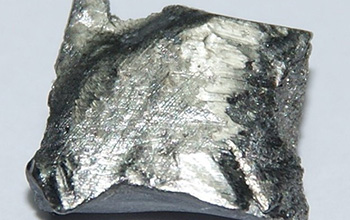 Researchers funded by the U.S. National Science Foundation have developed a luminescent sensor that can detect and measure the presence of a rare earth element called terbium. The element is used in manufacturing devices like car batteries, smart phones, energy efficient lighting and X-ray equipment.

The scientists were successful in locating the element using a protein known for the strength and selectivity of its bond to rare earth metals -- an approach that could be used to extract terbium from previously prohibitive environments.

Researchers used the sensor to test samples from an acid mine waste treatment facility that had low levels of terbium and contained traces of other metals. The sensor performed as well as ICP-MS mass spectrometry, which has long been considered the industry standard.

This technological advance will aid in the creation of a domestic supply chain of terbium and other rare earth elements by locating and measuring these valuable materials in plentiful sources, the scientists said, including industrial waste and manufacturing byproducts like acid mine drainage and coal waste.

The techniques involved will also avoid or reduce some of the environmental concerns that arise in some rare earth element collection and detection practices. The portability, affordability and capability to operate in suboptimal environmental conditions will transform how rare earth metals are sustainably identified, sourced and managed, the researchers believe.