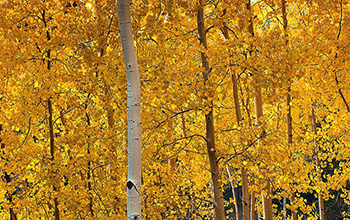 Watching paint dry has nothing on watching a forest grow.

The long wait has always made it challenging to study how forests adapt to environmental fluctuations -- making it that much harder to predict how they’ll fare in a changing climate or under new pest pressures.

A U.S. National Science Foundation-funded study by University of Wisconsin–Madison researchers reveals that aspen stands change their genetic structure over the years as trees balance defending themselves from pests with growth to compete for sunlight. Aspen is the most broadly distributed tree species in North America and a bellwether species, or an indicator of how forests will adapt to human-influenced environmental changes.

When faced with stiff competition, trees genetically predisposed to prioritize growth win out. But the survivors are less equipped to handle damaging insects.

The experiment demonstrates that evolutionary forces can quickly shape entire forest stands. It also suggests that exposure to a litany of environmental changes can help maintain diverse forests capable of responding to different stresses. The results are published in Proceedings of the National Academy of Sciences.

"This long-term project provides new insights into the role of forest structure on genetic diversity in aspen groves, and how that affects leaf traits that influence the abundance and distribution of herbivores," said Colin Orians, a program director in NSF's Division of Environmental Biology.

The findings are valuable for conservation biologists who want to preserve diverse forest ecosystems in the face of global warming, invasive species and other environmental changes.

"What this work has done is show how key traits -- like growth and defense -- can be coupled together and how genetic diversity will allow populations to adapt to new stresses," said Rick Lindroth, an ecologist at University of Wisconsin–Madison.

Aspens often colonize disturbed environments, such as the barren landscapes that appeared after wildfires in western North America in recent years. Thousands of trees germinate in a small area and the race begins to grow tall enough to escape the shade from neighboring trees. This intense competition quickly selects for winners and losers.