Scientists compared the fossil to digital versions of the bones 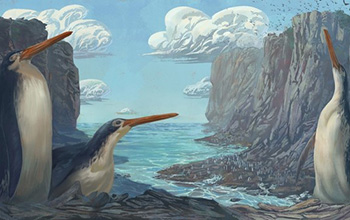 A giant fossilized penguin discovered by New Zealand schoolchildren has been revealed as a new species in the Journal of Vertebrate Paleontology.

Penguins have a fossil record reaching almost as far back as the age of the dinosaurs, with the most ancient to date discovered in Aotearoa, the Indigenous Māori name for New Zealand. Fossil penguins from ancient Aotearoa are mostly from Otago and Canterbury although important discoveries have recently been made in Taranaki and Waikato.

A group of children on a school fossil hunting field trip in Kawhia Harbor discovered the bones of the giant fossil penguin.

Researchers at Massey University and the Bruce Museum in Connecticut then analyzed the fossil bones. The team used 3D scanning as part of the investigation and compared the fossil to digital versions of the bones. 3D scanning also meant the team could produce a 3D-printed replica of the fossil for the junior naturalists. The penguin fossil was donated by the students to the Waikato Museum.

The scientists, including Daniel Ksepka of the Bruce Museum, say the fossil is between 27.3 million and 34.6 million years old, and is from a time when much of the area was underwater.

The penguin is like the Kairuku giant penguins first described from Otago but has much longer legs, which the researchers used to name the penguin "waewaeroa," a Māori word for "long legs." These longer legs would have made the penguin much taller than other Kairuku penguins when it walked on land, perhaps around 4.6 feet tall, and may have influenced how fast it could swim or how deep it could dive.

The research was funded in part by the U.S. National Science Foundation.