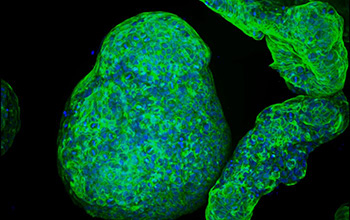 Researchers have developed a synthetic gel that can be used to grow pancreatic organoids, seen here.

U.S. National Science Foundation-funded engineers at MIT, in collaboration with scientists at the Cancer Research UK Manchester Institute, have developed a new way to grow tiny replicas of the pancreas, using either healthy or cancerous pancreatic cells. Their new models could help researchers develop and test potential drugs for pancreatic cancer, currently one of the most difficult types of cancer to treat.

The results are published in Nature Materials.

"Reproducibility is one of the major challenges in biomedical research and development, and this team's work is a remarkable engineering advance with great potential for cancer drug research while eliminating or substantially reducing the need for animal studies," says Sohi Rastegar, head of NSF's Office of Emerging Frontiers and Multidisciplinary Activities.

Using a specialized gel that mimics the extracellular environment surrounding the pancreas, the researchers were able to grow pancreatic "organoids" -- miniature, simplified versions of organs -- allowing them to study the important interactions between pancreatic tumors and their environment. Unlike some of the gels now used to grow tissue, the new gel is completely synthetic, easy to assemble and can be produced with a consistent composition every time.

"The issue of reproducibility is a major one," says Linda Griffith, a biological and mechanical engineer at MIT. "The research community has been looking for ways to do more methodical cultures of these kinds of organoids, and especially to control the microenvironment."

The researchers have also shown that their new gel can be used to grow other types of tissue, including intestinal and endometrial tissue.

The scientists also showed that they can use their gel to grow organoids from pancreatic cancer cells from patients. They believe it could also be useful for studying lung, colorectal and other cancers. Such systems could be used to analyze how potential cancer drugs affect tumors and their microenvironment.

One of the advantages of the new gel is that it is completely synthetic and can be made easily in a lab by mixing specific precursors. The researchers have filed a patent on the technology and are in the process of licensing it to a company that could produce the gel commercially.