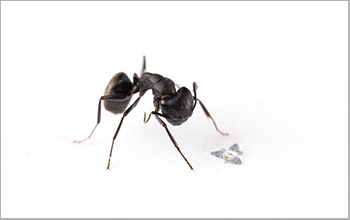 A 3D microflier sits next to a common ant to show scale.

Engineers have added a new capability to electronic microchips: flight.

About the size of a grain of sand, the new flying microchip, or “microflier,” does not have a motor or engine. Instead, it catches flight on the wind -- much like a maple tree's propeller seed -- and spins like a helicopter through the air toward the ground.

By studying maple trees and other types of wind-dispersed seeds, the engineers optimized the microflier's aerodynamics to ensure -- when dropped at a high elevation -- that it descends at a slow velocity in a controlled manner. This behavior stabilizes its flight, ensures dispersal over a broad area and increases the amount of time it interacts with the air, making it ideal for monitoring air pollution and airborne disease.

As the smallest-ever human-made flying structures, the microfliers also can be packed with ultra-miniaturized technology, including sensors, power sources, antennas for wireless communication and embedded memory to store data.

The U.S. National Science Foundation-supported research is featured in the journal Nature.

“Over the course of billions of years, nature has designed seeds with very sophisticated aerodynamics,” said Northwestern University's John Rogers, the engineer who led the device's development. “We borrowed those design concepts, adapted them and applied them to electronic circuit platforms.”

Most people have watched a maple leaf's whirling propeller seed spin through the air and gently land on the sidewalk. This is just one example of how nature has evolved clever, sophisticated methods to increase the survival of various plants. By ensuring that seeds are widely dispersed, otherwise sedentary plants and trees can propagate over vast distances to populate broad areas.

"Evolution was likely the driving force for the sophisticated aerodynamic properties exhibited by many classes of seeds," Rogers said. "These biological structures are designed to fall slowly and in a controlled manner, so they can interact with wind patterns for the longest-possible period. This feature maximizes lateral distribution via purely passive, airborne mechanisms."

To design the microfliers, the team studied the aerodynamics of several plants’ seeds, drawing its most direct inspiration from the Tristellateia plant, a flowering vine with star-shaped seeds. Tristellateia seeds have bladed wings that catch the wind to fall with a slow, rotating spin.